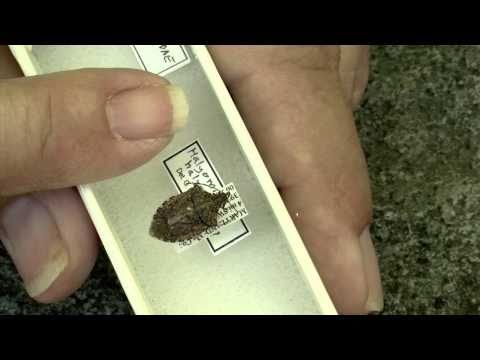 How To Get Rid Of Stink Bugs

This is proving to not be very easy.  Getting rid of stink bugs is a big concern for lots of people in the eastern United States.   There have been infestations there where the stink bugs have not only caused crop damage, but invade homes seeking shelter.  As the name implies, they stink.

There are several varieties of stink bug in the United States, but the most recent one causing a great deal of concern in the Brown Marmorated Stink Bug.  It is an import from Korea and China and has no natural enemies in the US.  This has enabled it to proliferate here in stunning numbers in New Jersey, Pennsylvania and other eastern and midwest states.  It actually found in about half of the states, including Oregon and California.

The Brown Marmorated Stink Bug is a true bug with a typical shield shape and is spotted.  It has a sucking mouth part, which means that it feeds and sucks on plants, drawing the juices from them.  In large numbers, it can cause quite a bit of damage.

It has the nasty habit of seeking shelter indoors, overwintering, and making the place smell.  Crushing one releases the smell, making them unpleasant to be around.  Is it any wonder people want to know how to control stink bugs?

So how do you get rid of stink bugs if you have them:

Keeping stink bugs out of the house:

. Caulk any openings they can get through.
. Vacuum up any you find inside and dispose of them in an enclosed plastic bag.
. Use screens on the house.
. Use light traps, which lure the stink bugs then trap them inside.
. Use insect repellents around the perimeter of the house, especially in fall.

Keeping stink bugs out of the garden:

. Again vacuum up any large numbers and dispose of them.
. Or spread a tarp under a shrub they are on and just whack the shrub, letting them fall onto the tarp.  Collect them and dispose of them.
. Plant decoy plants away from the house or garden so that they will move away from the things you don’t want damaged (stink bugs like corn and cabbage)
.  Also Tachinid Wasps may attack stink bugs.  They lay their eggs inside the stink bug and the larvae eat them from the inside.  In order to attract them to your garden, you can plant things such as dill, parsley or clover in your garden.
. Insecticidal soaps may help

If you have tried those methods of getting rid of these garden pests and still need help, you can go for chemical pesticides that are registered to treat for stink bugs.  However, if you have a lot of them, repeated sprayings is not good for you either.  If you do decide to use pesticides and don’t want to do it yourself, you can also consult an exterminator to help you

Several state, including Oregon State Department of Agriculture, are doing studies on phermone laced sticky traps, as well as other methods to deal with these yucky critters.  This is a work in progress.

Getting rid of stink bug odor:

.  First of all, don’t crush them.  You would just be releasing the smell.
.  It should dissipate after a few days, but some people have reported longer periods.
.  People have tried using things like borax to get rid of the smell on your hands or clothes
.  Lemon juice would have the same effect.

I have not had any large problems with stink bugs, but they are no joke to people living where there are infestations.  Trying one or more of the suggestions listed above may help you in your quest to get rid of stink bugs from your home and garden.